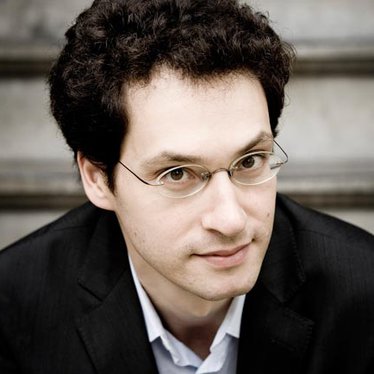 His performances of a broad range of repertoire – from Beethoven and Schubert to Ligeti and the music of today – reflect a degree of virtuosity and intellectual curiosity that has made him a favorite among audiences and critics, who note his "keen musical mind and deep musical soul" (NPR’s All Things Considered).

In the 2017-18 season, Mr. Wosner launches his recital series Schubert: The Great Sonatas, which continues his career-long, critically acclaimed engagement with the composer’s music. Described as a “Schubertian of unfaltering authority and character” by Gramophone, he performs Schubert’s last six piano sonatas over multiple concert programs at92nd Street Y in New York, The Phillips Collection in Washington, D.C., and other venues throughout the United States and Japan. Mr. Wosner’s recital repertoire this season also includes works from his latest solo recording, Impromptu (Onyx Classics, 2017), which features an eclectic mix of improvisationally inspired works by composers from Beethoven and Schubert to Gershwin and Ives. The pieces range from true improvisations to such stylized miniatures as Schubert’s Four Impromptus, D935, and together they reflect Mr. Wosner’s interest in exploring subtle connections between works of contrasting styles and time periods. Impromptu forms the basis for a fall recital program presented by Peoples’ Symphony Concerts in New York.

Additional 2017-18 highlights include season-opening performances in Singapore (with the Singapore Symphony Orchestra) and Jerusalem, including a performance of duo-piano works by Debussy and Ravel with Martha Argerich at the Jerusalem International Chamber Music Festival. In May, Mr. Wosner premieres Dissolving Margins—a new work composed for him by Christopher Cerrone—with the Orquesta Sinfónica del Principado de Asturias in Spain; scored for piano and strings, the work is based on the writings of Italian novelist Elena Ferrante and will receive its U.S. premiere at the Chautauqua Festival in July 2018.

Further appearances as a soloist include performances with the Boulez Ensemble (at the new Pierre Boulez Saal in Berlin), Aurora Orchestra in the U.K., and Princeton Symphony Orchestra. He also continues the Bridge to Beethoven series with his longtime collaborator, violinist Jennifer Koh, in recitals across the nation, appears in duo recitals with violinist Veronika Eberle (in Japan) and cellist István Várdai (in Hungary and the U.S.), and performs in chamber music by Fauré with cellist Steven Isserlis as part of the International Musicians Seminar in the U.K.

Mr. Wosner records for Onyx Classics and his recordings have been widely praised for their inventive pairings of classical and modern masters. His most recent release, Impromptu, goes further by featuring seven composers—Schubert, Chopin, Beethoven, Liszt, Dvořák, Gershwin, and Ives—in thirteen solo piano works. Previous releases include concertos and capriccios by Haydn and Ligeti with the Danish National Symphony conducted by Nicholas Collon, solo works by Brahms and Schoenberg, and works by Schubert paired with new works by Missy Mazzoli.

As a chamber musician, Mr. Wosner has recorded Beethoven’s complete sonatas and variations for cello and piano with Ralph Kirshbaum for Onyx Classics, as well as works by Bartók, Janáček, and Kurtág with violinist Jennifer Koh for Cedille Records.

Mr. Wosner is a recipient of Lincoln Center’s Martin E. Segal Award, an Avery Fisher Career Grant, and a Borletti-Buitoni Trust Award—a prize he used to commission Michael Hersch’s concerto Along the Ravines, which he performed with the Seattle Symphony and Deutsche Radio Philharmonie in its world and European premieres. He was in residence with the BBC as a New Generation Artist, during which he appeared frequently with the BBC orchestras, including conducting Mozart concertos from the keyboard with the BBC Scottish Symphony Orchestra. He returned to the BBC Scottish Symphony in both subscription concerts and Proms performances with Donald Runnicles and appeared with the BBC Philharmonic in a live broadcast from Manchester’s Bridgewater Hall.

As a concerto soloist in the U.S., Mr. Wosner has appeared with the orchestras of Atlanta, Baltimore, Berkeley, Chicago, Cleveland, Dallas, Indianapolis, Los Angeles, Milwaukee, Philadelphia, Pittsburgh, and San Francisco, among others. In addition to the BBC orchestras, he has performed abroad with the Barcelona Symphony, Bournemouth Symphony, Frankfurt Radio Symphony, Gothenburg Symphony, LSO St. Luke’s, National Arts Centre Orchestra, Nieuw Sinfonietta Amsterdam, Orchestre National de Belgique, Staatskapelle Berlin, and the Vienna Philharmonic, among others. Mr. Wosner has also appeared with the Orpheus, St. Paul, and Los Angeles Chamber Orchestras, having conducted the latter from the keyboard in a 2010 concert that was broadcast on American Public Radio.

Widely sought after by colleagues for his versatility and spirit of partnership, Mr. Wosner has collaborated as a chamber musician with numerous artists, including Martha Argerich, Martin Fröst, Lynn Harrell, Dietrich Henschel, Ralph Kirshbaum, Jennifer Koh, Cho-Liang Lin, Christian Tetzlaff, and Pinchas Zukerman. He has also collaborated with leading chamber ensembles, including the Grammy Award-winning Parker Quartet in The Schubert Effect recital series. Mr. Wosner is a former member of Lincoln Center’s Chamber Music Society Two and performs regularly at various chamber music festivals, including Chamber Music Northwest in Portland, the Jerusalem Chamber Music Festival, the Oregon Bach Festival, the Piano Aux Jacobins festival in France, and the Santa Fe Chamber Music Festival. Recent chamber music engagements include performances presented by the Internationale Beethovenfeste in Bonn and Kunstfreunde Wiesloch; Beethoven recitals with cellist Ralph Kirshbaum at the Phillips Collection in Washington, D.C., and the Wallis Annenberg Center for the Performing Arts in Beverly Hills, among other venues; a performance of Berg’s Chamber Concerto presented by the Kammerakademie Potsdam; and Bridge to Beethoven recitals with violinist Jennifer Koh.

Born in Israel, Mr. Wosner enjoyed a broad musical education from a very early age, studying piano with Opher Brayer and Emanuel Krasovsky, as well as composition, theory, and improvisation with André Hajdu. He later studied at The Juilliard School with Emanuel Ax. Mr. Wosner is on the faculty at the Longy School of Music in Boston. He resides in New York with his wife and two children.

For more information on Mr. Wosner, please visit his fan page on Facebook and go to shaiwosner.com.