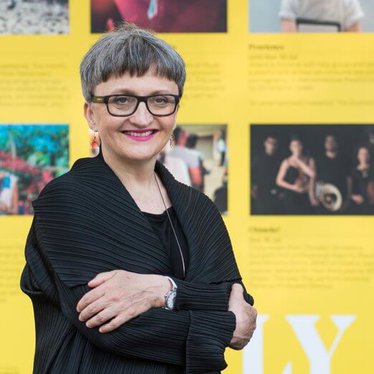 Gillian Moore is Director of Music at the Southbank Centre.

Gillian Moore was appointed Head of Classical Music at Southbank Centre in December 2011, having joined the organization as Head of Contemporary Culture in 2006. Before 2006, she had a long association with both Southbank Centre and the London Sinfonietta. She was the Artistic Director of the London Sinfonietta from 1998 to 2006, combining that post with running the audience development programme Inside Music at the Royal Festival Hall and being a Visiting Professor at the Royal College of Music.

In 1998 she was also Artistic Director of the ISCM World Music Days in Manchester. She was Head of Education at Southbank Centre from 1993 to 1998, developing an approach that integrated educational and artistic activity. From 1983 to 1993, she was the Education
Officer at London Sinfonietta, the first such post of its kind in the UK.

During her career, Gillian has collaborated with many of the great musical and artistic figures of our age, from Luciano Berio to Radiohead, from Harrison Birtwistle to Squarepusher, from Steve Reich to Akram Khan and has commissioned many significant new works. In 1991 Gillian was awarded the Sir Charles Groves Award for services to British music, in 1992 she was created an Honorary Member of the Guildhall School of Music and Drama, and in 1994 she was awarded an MBE for services to music and education.

Gillian regularly writes and broadcasts about music. In particular, she is a regular contributor to BBC Television’s coverage of The Proms and to BBC Radio 3. Gillian is a council member of the Royal College of Music and of the Royal Philharmonic Society.